Cloud Pricing Comparison Between AWS vs Azure vs Google Cloud

Cloud Pricing Comparison Between AWS vs Azure vs Google Cloud 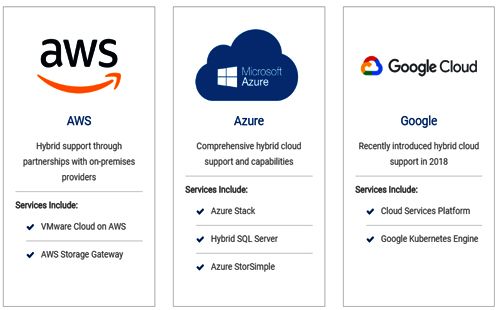 AWS, Azure and Google Cloud comparisons of costs in the cloud have always been tricky since demand fluctuates often. Indeed such a variation May only have short-term value in terms of what you will pay today for comparing cloud instance pricing. Still, it also reveals crucial cost differences you may not have previously identified. In addition, it also helps you in estimating the budget of your software development project.

On an average computer, resources represent almost 75 to 80% of organizations’ cloud spend, and it is because a computer instance is what drives the price you pay. This blog will compare the pricing of AWS EC2 vs. Azure VMs vs. Google Cloud VMs.

To better understand the pricing difference, you can consider the same region for comparing CPUs and operating systems for AWS instances, Azure virtual machines, and Google cloud machines.

Types of virtual machines are:

For comparing AWS EC2, Azure vs. Google Cloud needs to run instances with similar RAM and CPU for each type of instance. Nevertheless, you should know that memory optimization accelerated computing instances for Google cloud are an exception. Minimum vCPUs currently don’t start with 4vCPUs, unlike Amazon Web services and Azure.

Alternatively, they begin at 40vCPUs for memory-optimized systems and 12v CPU for accelerated computing systems, which can indicate highly advanced computation possibilities and might seem over-the-top when looked at from a pricing angle. Yet, it is important to keep in mind that the memory optimizer and accelerated instances of Google Cloud offer superior memories.

For each of the four instance types scenarios, you can find the hourly on-demand pricing of each service in the table below.

Note: Red indicates the highest price, and the green represents the lowest price for the respective instance type in the above table.

All cloud providers provide companies savings when they commit to using them for one or more years of on-demand instances. The AWS is dubbed “Red Savings” (RI); Azure is known to refer to “Referred Savings,” while in Google Cloud, it is known as “Commitment Price.” Unfortunately, these discount types encourage firms to use the hourly discount rate in some (but not all) cases and VMs at a preconceived level over a predetermined term.

We evaluated a one-year commitment period with no upfront costs to compute reduced prices across AWS, Azure, and Google Cloud. At the moment, AWS supports three different instances of reservation: standard RIs, convertible RIs, and scheduled RIs. It varies from one kind to another.

There is also a three-year commitment plan for organizations convinced they would last longer using all three cloud technologies. Azure and Google Cloud provide three-year engagement schedules like those of AWS, however for all 1-year commitments, regardless of the instance types, AWS has a set average discount of 40 per cent.

AWS revealed in 2017 that EC2 Linux-based instances and EBS volumes might be charged per second. They still get a second charge today and have been extended to some degree to other services.

While there is no official mention of Windows, RHEL, or SLES second costs, you can discover innumerable customers describing their AWS services being charged for Windows per second. Some people suggest that it may be a defect, while others think it may be an AWS test, but an official announcement confirms that either idea is still not made.

However, AWS has officially confirmed that each half instance utilized in an hour by a user would be charged per second for all Linux instances. It’s worth mentioning that per-second billing is considered with a minimum 60-second limit. This per-second charging applies to on-demand pricing plans for businesses in all publicly stated regions with AWS instance zones.

Also read, 10 Best Programming Language For Beginners To Learn In 2021

Although Azure has since late 2019 begun to accept secondary charges without long-term engagement, it has not been provided to everybody. They are still charged per minute because their billing per second remains mainly focused on container instances.

Microsoft intended to concentrate on containers for ordinary cloud storage cost comparison since they think containers make the most sense per-second pricing. You should be committed to improving accounting systems throughout our platform and to making the usage of our customers easier and more nimble.

Google’s cloud has previously billed in an hour, followed by AWS in a minute. But Google Cloud followed suit if AWS introduced per-second charging. As a result, Google Cloud’s second-hand billing is better than AWS, which offers this service solely for Linux instances. However, all VM-based instances are charged per second in cloud storage cost comparison. In addition, they have increased their ability to invoice by concentrating on the granularity of seconds to lessen user load.

All occurrences are measured in seconds, and occurrences are counted at 1-second increments after each minute. You must remember that the instance is believed to have terminated and is nevertheless charged for 1 minute if the virtual machine runs for 30 seconds or 1 minute.

As an enterprise, while choosing a cloud service provider, you need to consider several elements, and the price cannot simply be left unchecked. This cloud pricing comparison can certainly help you save thousands of dollars if millions of users utilize your application and you utilize thousands of instances.