Bootstrap Vs Material UI: A Complete Guide For Amateurs 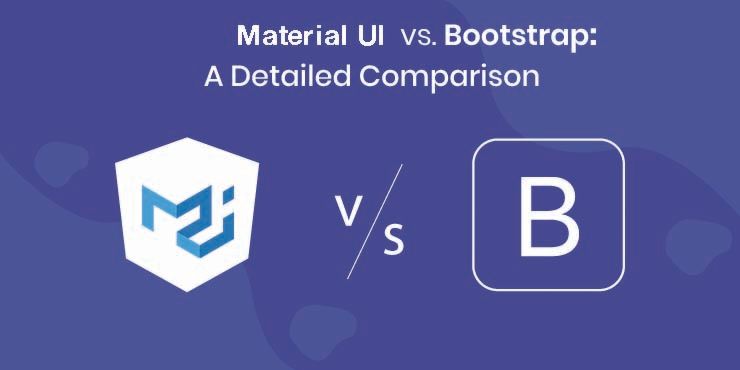 Bootstrap vs. Material UI is the two most reliable web development frameworks available in the market today. While bootstrap's consistent user experience, full-speed documentation, and development are popular. Material UI provides flexibility to develop distinctive, attractive, and modern apps. In this article, we will look at both frameworks and explore the differences between Bootstrap and Material UI.

What is Material UI?

Let's first grasp what material design is before we develop the Material UI.

Material Design is a collection of concepts or standards or a "design language" that Google created with the expansion of Google Now's Cards, as it is often called. It walks you through all website design elements and informs you how best to build your site. This involves the usage of buttons, animation, the different angles of positioning, etc.

A simple and high-quality user experience, the mobile-first language without any dependence on JavaScript frameworks. It employs its foundation for a material design that provides more flexibility, customizability, and creative freedom.

Material UI React-based framework that follows material design in its applications. It is a react component used by the likes of Amazon, unity, NASA, etc.

It is an open-source mobile-first front-end web development framework based on CSS and HTML. Bootstrap is mainly dependent on jQuery plugins of the JavaScript framework. It was released as an open-source platform in the year 2011 to reduce inconsistencies in web application development. There is wide support provided to developers through its community and its excellent documentation.

What are the differences between the design process and components between Bootstrap vs. Material UI?

How do dependencies impact Bootstrap and Material UI performance?

Bootstrap is an inclusive framework that has various features and depends totally on the javascript framework and other CSS classes. It results in a very large app size, hampered performance management, battery drainage, and pages load slowly. Developers should make their apps lightweight by getting rid of extra weight in the form of additional components.

As mentioned earlier Material UI is dependent on javascript frameworks for its libraries and plugins. It operates on a set of React-based components and is entirely CSS as each component functions independently of another.

Material UI is dependent upon Angular Material and React-Material UI. The SASS preprocessor is used by both frameworks but only Bootstrap supports fewer languages.

Bootstrap is open source so there is enough help with code documentation. Therefore it is obvious that Bootstrap documentation and support are top-notch.

You may also like What Are The 11 Best CSS Frameworks To Look Forward To?

Is development faster on Bootstrap or Material UI?

As many features are loaded into Bootstrap, developers have access to various design elements like buttons, tabs, tables, and navigation. It doesn't require much effort on a developer’s path as they will be able to get an app’s design and functionality efficiently. Access to design templates and themes is also available online. So development using Bootstrap doesn't require a lot of time.

Material UI is loaded with UI components that allow developers to develop a flawless application in a very small period. Nevertheless, Bootstrap's accessibility allows development faster as compared to the material.

Customization in Material UI and Bootstrap

Applications designed by Bootstrap are markers of consistency when talking about customization. The goal behind launching it as an open-source framework was for maintaining consistency across its applications. Therefore even though Bootstrap's apps are majorly different, the user experience will remain the same on both of them.

Even though app development using Material UI follows principles of material design they are applied uniquely by all web developers. Material-based applications are customized uniquely and they have a modern interface but the flexibility in user experience is lacking.

It may interest you to know that users may combine the greatest features of both Material Design and Bootstrap. Material Design Bootstrap, or mdbootstrap, is the name of the combination. This will enable you to combine responsiveness, rapid development, and app adaptation to various resolutions.

mdbootstrap is a Material Design-based framework that uses Bootstrap, Vue, Angular, and React. There is no learning curve, and mdbootstrap inherits numerous additional elements from Bootstrap and Material for a uniform user experience.

When it comes to designing an app there are usually beautiful visuals and practicality in usage that make app development successful.

Whereas Material UI is excellent with its animations and design styles. Both can be useful in different or the same domains. And if you still cannot decide there is another option for you - mdbootstrap.

Hope this helps solve the debate between Bootstrap vs. Material UI.